Your experience on this site will be improved by allowing cookies.
Menu

Harrow Angling Society is a coarse fishing club based in the Colne Valley with a total of 4 lakes and a stretch of river available to its membership, which currently stands at a little over 230 members. 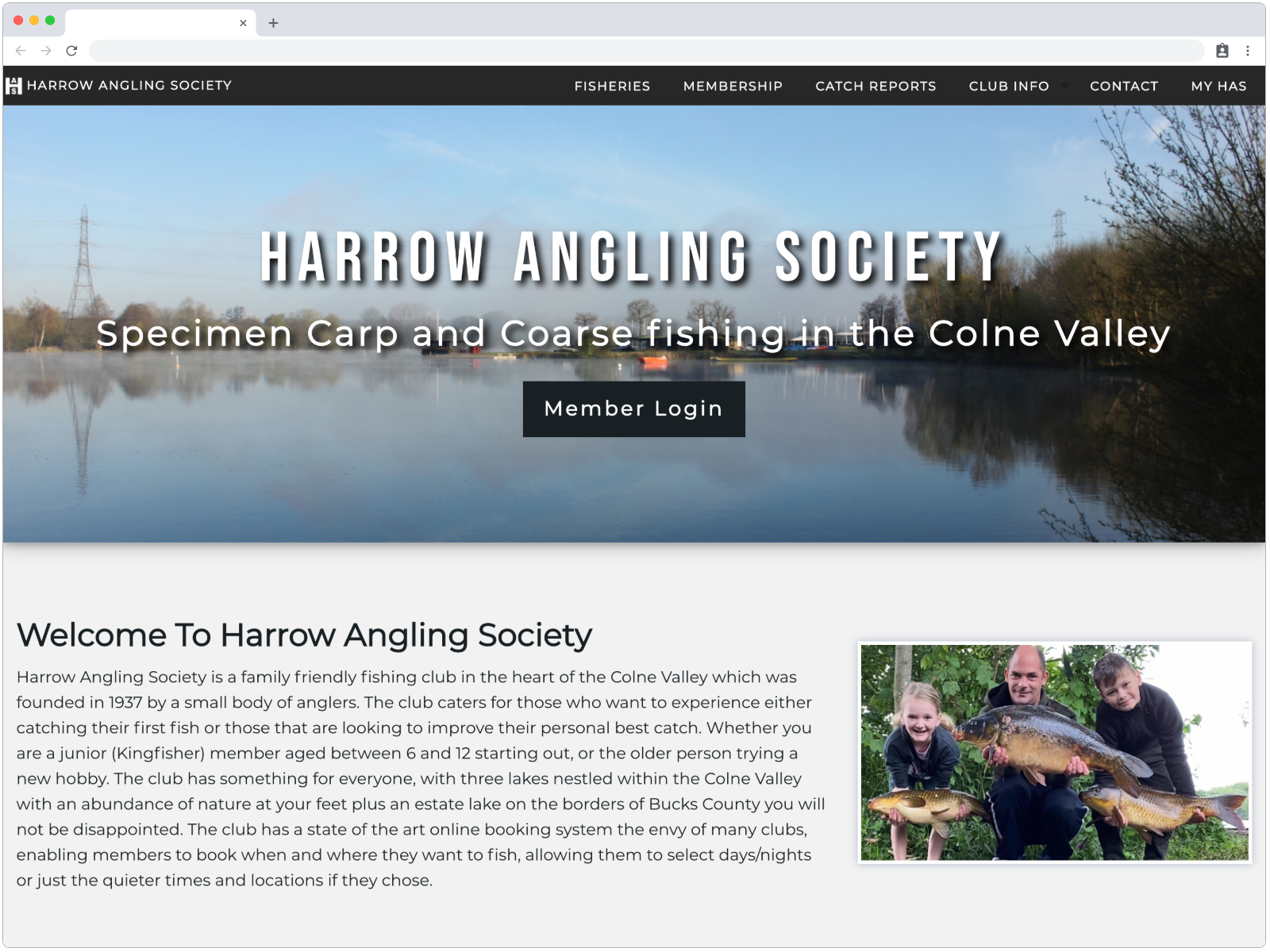 When Harrow Angling society approached me, the club currently had a website which had been built in the early 2000s. The person at the club who ran the website had sadly passed away and nobody else within the club had access to update any information.

With tradition and history being an important part of the club and a good percentage of the membership being of an age where the use of the internet was not necessarily something they had experience using or felt comfortable using, the online service for members had to run parallel with the existing way of running the club and not entirely replace what was already there.

The club requested that the majority of the information on the site be kept, as it was still applicable but the design needed to be brought up to date visually and include some more functional features for the benefit of the clubs management and membership.

There was an initial build which was agreed upon and then at a later date, the club wanted to add more features to the website to improve the user experience. The club wanted to include the abillity for members to renew their memberships online to give an alternative method of paying their annual fee.

My response to this challenge was going to rely on a mixture of my experience and some meticulous planning, to effectively map out how such a complex back end would work, when considerations for members ages and work party discount vouchers affected how much tickets cost.

I was able to split the project into three sections;

For the main body of the website which the public would see, I created a mobile responsive layout and transferred all the data from the old website, which was still relevant and also worked with the clubs committee, to update and create new content that was up to date. I also went to each of the venues and took high-quality photos to use on the new website.

Working with the existing database

Once the full membership system was agreed upon, the first step was to copy the membership information from the pre-existing database, to the new online database. A system was then implemented so that members can claim their account automatically, by entering their information. If the information entered matches a record in the database, the users request to set a username and password is then processed, so that they can now log in and use the service. This feature eliminates any need for the admin to process accounts manually.

Now the membership system is in place, this created the ability to restrict catch reports to being submitted by a logged-in member. This eliminates the need for the clubs curator to approve catch reports, further automating the content of the website.

Having logged in members post catch reports, further helps the clubs curator track the reports and saves having to count catches at the end of the year when trophy winners are decided. In the admin panel, the curator has data available which tallies how many catches each member has reported this season*, how many reports have been submitted for each venue in the current month, previous month and season total.
On this page the curator can also upload catch reports he has received via other means from members who do not wish to use the online service, keeping all his data in one place.
* Members names have been removed from the screen print for privacy

One of the key reasons Harrow Angling Society wanted their website was to relay information to their members. This generally included information about work parties, renewal dates, changing closed seasons and members meetings. On the initial build, an announcement section was created with the latest announcement being displayed on the home page for members to see.

Once the membership system had been implemented it became possible to upload announcements to the website and simultaneously send these announcements directly to all members emails who have signed up for the online service.

The newly created online membership system was branded MyHAS. Once the users have set up their account as described previously, they can now log in to their profile. On this profile page, they are displayed with a dashboard that includes an overview of their information, which they can update from this page, basic information about upcoming work parties, a catch report form, guest ticket form and when renewal is opened for the next season by the membership secretary, the membership renewal form.

I am going to make this process a separate section so that you can understand from start to finish how this works. Seeing it from the admin actions through to the members payment and finally how the membership secretary then processes paid tickets.

Step 1.
The membership secretary will create a new season in the admin panel. Prices for each aspect of the membership for the next season are then input into the relevant field. The renewal status for the season can then be set to open or closed. This can be opened or closed as and when you like.

Step 2.
Once the renewal status is set to open, members can log in and renew their ticket. Selecting options such as night tickets, associate members and adding juniors. Discounts for juniors and seniors will automatically be applied based on the member's age.

To allow for this discount to be applied to an online application, the person now running a work party takes a register that is entered online.

During the initial build, work party dates would be added as an announcement on the website. With the membership system now in place, work parties are added as a calendar event with a date and time. Email reminders can now be sent to all members before each work party to make sure the turnout is as good as possible. The register is completed within this calendar event and members will see the discount available on their profile page when renewing their ticket.

The Harrow angling website is now in a position where if they should choose, they can manage the club solely through this website. I still work closely with the society and attend a monthly meeting to discuss the running of their website.
The websites membership system is currently used by 80 members and 29 members used the online renewal in the first year. These numbers are expected to greatly increase in the second year with more awareness of the service available.
The total visitors per month on average exceeds 450 unique visitors.

Harrow Angling Society ranks well for a number of key words. In the past 3 months the website has recieved over 1000 clicks and been displayed over 7000 times in organic search results. The clubs website ranks above some of the best known commercial carp fisheries in the region for certain search terms.

How this can help you

What I have listed above is an overview of how a website can be used to run a fishing club or any real world membership style organisation. This type of website can be adapted to cater different needs. For example a website can be made exclusively for members, showing no public information, ensuring the organisation is kept as private as possible, whilst still providing a modern user experience and accepting the most common payment method in todays society.
If you have any questions about this project or have any queries about how my services could benefit you, regardless of your industry, feel free to contact me for an informal chat.

Let's start a new project together